I am currently researching my two passions – that of Yoga Psychology and also The Person-Centred Approach. I would like very much to do this through the Doctorate in Psychotherapy by Professional Studies DPsych(Prof) at The Metanoia Institute. However, having been accepted on the programme in 2018 I now need to wait until the course is eligible for Student Finance.

In 2014 I completed a yoga teacher training course with the Devon School of Yoga. I do not teach Yoga professionally, as I am too absorbed by my psychotherapy practice. I am however very interested in how Yoga and psychotherapy can work together. Yoga’s psychology and philosophy is very compatible with Mindfulness – the Eastern practice that is now so prevalent in modern Western therapeutic practices. In my doctoral studies I hope to research how Yoga psychology and philosophy can be incorporated into Person-Centred Psychotherapy.

Carl Roger’s – the founding father of the Person-Centred approach – became aware in his later life of how his thinking was a bridge between Eastern and Western thought. I would like to try to put words to describe the bridge. The best words I have found so far are those of Lao-tse that Rogers himself quoted :-

“ It is as though he listened
and such listening as his enfolds us in a silence in which at last we begin to hear what we are meant to be.”

To give some background to my interest in Yoga, here’s some of my personal experience:-

I remember going to yoga at school when I was a teenager; stressed with the business of making friends, studying for exams and finding out who I was in the world and my place within it. I remember finding an hour on the yoga mat like an oasis of pleasure, peace and calm, and left the mat with such sadness that I was leaving that space behind. I couldn’t see how the space could continue in my day to day life.

I look back now and wander why I didn’t latch on to the idea that Yoga could have become a way of life for me. I was searching for meaning and identity in life –why didn’t I respond to my discovery of Yoga? Perhaps I perceived it as a discreet hour of exercise and relaxation. On the other hand, maybe the path I took was right for me – that of travelling, teaching and eventually finding meaning through psychotherapy.

Two things happened to me at the age of 40. One was that my body started to show signs of ill health – I could no longer rely on the lightness and resilience of youth to recover from stresses and strains. The other was that I found myself in deep mourning and grief, as well as a state of anxiety about the future.

I started a Yoga class but this time around I did not enjoy the hour on the mat. I despaired at how inflexible my body had become after 20 years of not practicing, and it was hard for me to relax and switch off from my anxieties. My mind was not still but I persevered.

It was worth persevering. The more I practiced in class, the easier the poses became and my body responded with a sense of lightness and health. I started unravelling the vicious circle I had got into. With a healthier body, I felt lighter and healthier mentally. Other changes became inevitable. What I felt that I knew – that the mind and the body are not separate and are part of the same system – became evident. I was experiencing Yoga – the unifying of the parts of the whole. 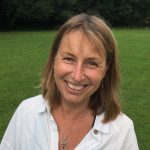 Juliana is a Senior Accredited Counsellor /Psychotherapist. She has experience of working with diverse issues at a number of different agencies and settings

She has worked as a counsellor in volunteer agencies, schools, universities, GP practices and also in private practices.

Juliana is registered and holds senior accreditation status with the British Association of Counsellors and Psychotherapists (BACP).